Abundant sunshine, great beaches, crystalline waters, fresh local food, and the largest active volcano in Europe – what more could you ask for in an Italian vacation? Sicily, a triangular island off the boot of Italy, is really a country unto itself; at least the Sicilians think of it that way.

The village of Taormina, perched high above the sea on the eastern side of the island, has always been a must stop for tourists. From composer Johannes Brahms to comedian Woody Allen, all have enjoyed its restored mediaeval buildings and stunning ocean views. The Greeks, Romans, Byzantines, Arabs, Normans, Swabians, the French and the Spanish all came to Taormina and left their mark. The Teatro Greco, a 3rd century Greco-Roman amphitheater, hosts a variety of events today, and from the seats, one can see Mount Etna rising in the distance, still smoking from a recent eruption. 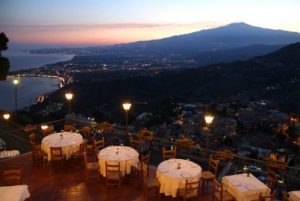 A spectacular view from the terrace at Al Saraceno Restaurant

The Grand Hotel Atlantis Bay clings to the cliffs and was themed after the lost city of the same name, and the lobby and hallways certainly feel grotto-like. The rooms are large with all the extras – great bed, bath products, slippers, and robes. The bathroom was smallish, but the tub was deep enough for a long soak. The small patio off the room offers a terrific view of the waters below. Breakfast was served on an outside terrace right above the pool and the sea. The cantaloupe was perfectly ripe, and with fresh-squeezed orange juice and eggs made to order, the day started off right. Gazing at the bright blue waters of the Ionian Sea didn’t hurt, either.

A charming local restaurant, Al Saraceno, is situated high above the bay and is known for its spectacular, panoramic view; diners can watch the lights come on below each evening. The owner, Alfio Puglia, is very attentive to his guests. Wood-fired pizza dough is served in place of bread. Fresh local fish came in a mixed grill and included king prawns, calamari, and scampi served with olive oil, garlic, lemon, parsley, and oregano.

Up a very winding road was Patria, one of the largest privately owned wineries in Sicily, with the local rich volcanic soil providing a unique terroir for wines. Tours take visitors to a volcanic cave with the layers of eruptions clearly displayed within.

Once oriented, we sat around a huge table for a feast with the vineyard owner. It was easy to lose track of the courses (maybe seven). Fabulous wines were paired with each offering – Neri d’Avola, Etna Rosso, Cabernet, Etna Bianco, and their vintage 2001 Etna Rosso. Multiple varieties of antipasti, both hot and cold, were followed by wild mushroom risotto, seafood pasta, and finally grilled boar medallions. (Some Norwegian tourists, sitting at another table, burst into song halfway through our three-hour meal, which provided an unusual musical accompaniment to a wonderful Sicilian experience.) 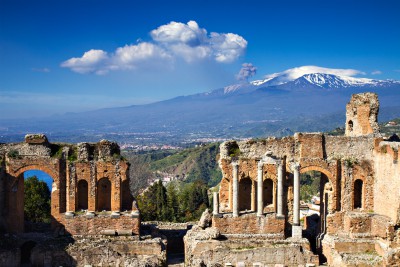 Ruins of the Greek-Roman Taormina Theatre

Working off an enormous lunch at Patria, visitors can visit Mount Etna and walk around one of the many craters left from previous eruptions. The lava fields looked like the moon’s surface, with blasted and cratered lava rock stretching downhill for miles.

On the other side of island, a day trip to Agrigento offers a window to the history of this special place. Lunch al fresco on the Terrace of the Gods at the five-star Villa Athena hotel included an incredible seafood pasta, followed by crab-stuffed white fish. Dessert was a pistachio semi-fredo, a cross between ice cream and a soufflé. Many glasses of a lovely, cold, white Alta Villa Grillo wine followed.

The Villa, built as a magnificent private home at the end of the 18th century, became a hotel in 1972. The gardens of the villa surround a vivid blue swimming pool, which blends into the landscape of almond and olive trees. The patio overlooks the distant, but visible, Temple of Concordia – an incredible masterpiece of Doric art from the 5th century BC – rivals any Greek temple anywhere else in the world, even in Greece itself. The temple owes its preservation to being turned into a church in the 6th century, which saved the fundamental structure of the original temple.

Just outside of Agrigento, a two-hour walking tour takes visitors through the Archaeological Park of the Valley of the Temples, a UNESCO World Heritage Site since 1997. Founded in 582 BC, Agrigento was one of the most important and most culturally advanced Greek cities in the Mediterranean. The archaeological park consists of seven temples (and various other remains) built between about 510 BC and 430 BC. These are:

Ancient Akragas, as Agrigento was known, attracted philosophers and poets who described it as “the most beautiful of mortal cities.” Today, it attracts visitors from all over the world, who stroll through the temple ruins, imaginingtheir past glory.

No matter what your interests, Sicily today and Sicily of the past combine to make an amazing vacation location.